The next line is a lie.

The previous line is true.

Going by the first line, the next line is a lie. Which means that this line isn't true either. But if this line isn't true, then the next line is true which contradicts what I just said, the first line is true. This would go on like a tussle, both saying the same thing, but both presenting a totally different realm of contradiction. That is what happens when there are only two states and the two decide to conspire. 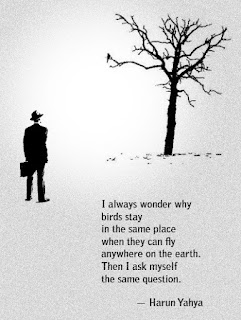 Life is about a million little things, like a universe is a million little stars. In each one of us is a microcosm that begun very much like the big bang and the universe shall end up like we all do.
Thought over by Blasphemous Aesthete

Totally agree! Life is but a paradox of a million little moments cherished and feared; loved and hated; smiled and cried at..

This reminds me of this engineer asking boons from a genie in such a manner that the genie is in a loop.

Contradiction always brings new beginnings and that is how we survive, in the hope for more such paradoxes.

This is by far the most profound post I've read.. :)

I read it once, I read it again!
Wow, I say to myself.
A thought-provoking one!
I am reading it again!
The contradiction is just amazing!
Regards:)

And the million little stars are not so little after all!!!

If we had the answers to every question, there would be no paradoxes. Until then, we live in the joys of these thoughts before ultimately dying of boredom.
Profound post.

Math science history, unraveling the mystery, it all started with a BIG BANG!

And your next and previous lines mind-boggle the bejesus outta me.

you have just confused me..
still pondering..

I love this. Best post I've read in a long long time.

Isn't that why there is no one way to live life...because life is a paradox and so every advice you get contradicts some other advice.

@Dimitri
Engineer eh? We must be related then. :P

@Kinara
You have a nice name oh, and welcome to Aesthetic Blasphemy.

@Giribala
It's all about the perspective and view.

@Abhishek
If you've not found the answers, there are only two possibilities. 'Not yet there, but on the right track' or 'you're doing it wrong'.

@Zeebs
They're not my lines, just a poor replica of some master's art work, the first and the next line that is. :)

@Sumukh
Try it if you have too much time set aside for doing no-things, otherwise, do the thing you are supposed to :P

@Soumya
I am glad.

@Nikki
Every advice is relative, too bad that the one who gives it does not read the offer document carefully, nor does the one taking it.

million lil things shaping up our lives.. most of them apparently opposite in nature..
very appropriately u expressed that :)
more we know, more we come to realize that we know so little :P
an eternal paradox..

Wow!
I read this post twice and wondered both the times ...
What a contradictory :D

And I'm glad to inform you .. An award is waiting for our great writer on my blog :) :)

Profound and abstract all at once! Love it!

True...life by itself is a paradox. Thought provoking post.

@Simran
It's a merry go round, like a dog chasing his tail. There are times when you'd be filled with glee to loop around doing it again and again, and other times, you just won't bother :P

@Purba
Confusion brings clarity, which is ensued by a confusion of higher degree, and loop :)

hmm life is about looking into little little things ...n find happiness in them..
life is .... so beautiful and we most of the time either lost in past n future ..and miss the present...

This is why you make it so hard for me to decide which one of your posts is my favorite!

I too enjoy reading or writing paradoxes.
'Change is the only constant thing.' This one has always enthralled me.

Lovely connection of humans and the universe. Life is indeed about a million things. :-)

P.S: That picture quote...sigh! It is extremely beautiful.

It's amazing how you conjure up such thoughts in your head and pen them down.

Deep and insightful. By far one of the best posts I've read :)

This is by far the shortest post that I've read today. Yet, it is by far my favorite. Profound :)

Yes. Life is about a Million little things. Loved those words :-)

How succinctly put. Life is a paradox - it depends on which side you choose.

After all, aren't we kept alive by those very million little things? :D

I love the quote. It made me think.
A short post, but you said so much :) Great!

I love paradoxes too, they define me most of the time-but then truth and lies are really non-existent.

What we think is true maybe just a perception and maybe not? I like the word play and that birds waala quote had caught my fancy too a while back, when I had tweeted it....
It really makes you think, na...just like you do? :-)

When there are two states and two decide to conspire.. do they collide among themselves and end.. or do they make the mind wonder and wonder in endless loops of abstract thoughts and confusion?

Good one! especially the picture :)

Aaah, so nicely put. Paradoxes are intriguing and the frame you've used paradox in is probably going to keep me thinking for a while. :-)

U have been tagged as a 'Versatile Blogger'. Pls visit my blog. tc.

The previous line is true.. :P

What's one's truth can be someone else's lies...ok, twisting the original quote to suit my purpose but life is a paradox some said and then left us to ponder on it. On a simplistic level it is, so many things could have gone wrong, yet here we are, alive and analysing.
Nothing less to be expected from you.

PS. Can you turn of the verification, my ageing eyes hurt with the effort to configure?

The contradiction is indeed confusing. I agree with the last lines of the post. We begin and end at the same point...

First time on this blog, and well, hasn't everyone already said everything about it! :) Loved that ironical birds analogy at the end to no end.

Sorry, that was me trying to sound equally ironical there with that end-no end catastrophic phrase! ;)

So very true..My mind is still in the thinking zone after reading what you wrote.. :|

Really well put together. Life's full of these weird paradoxes that leave niggling doubts in our minds about the choices we make. A paradox does well to avoid the distinction between right and wrong, and saves us the trouble of always having to stick with one.

What's life without contradiction or paradoxes? I'd say, a comic of stick figures

i sooo love what the picture say. i guess we all love our homes, our shells, our areas the most, we feel safe here even though we know how short our lives are but we just keep wishing

u were high when u wrote this. Such paradoxes only arise then!