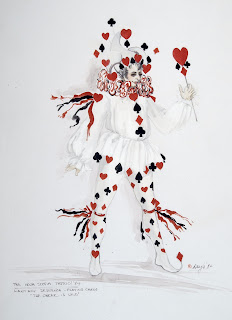 The entity of chance, the replacement, the jack of all trades, the solitary maid, the wild card, the trump card, who is he? The Joker.
Have you ever seen the face of the joker? Behind his grin, behind the façade that he puts up? Oh no, you never cared for that, he’s just a nobody, a somebody taken for granted. You are too busy praying for the kings and queens and aces. He comes in as substitution, do you ever see his real face? I don’t think so, until it is his game that you play. He never moans, he never cribs. Lo, there comes the joker! Now everything will be all right. He makes you laugh, and would never share his troubles. He goes to war, and wins it for you. We never lose hope in the joker. He loses, he’s banished again, he wins, and he’s banished nevertheless. Yet he comes back next time.
Among the kings, and queens and aces,
Turn wise steps and rapid paces,
In those royal suits comprising fifty-two,
There lives a solitary Joker!
He carries something in his hand, it is another mask to put on sometimes, or cards otherwise. Why is he the trump card? Because, he knows each role, and that too very well. Look at his mask again, and look at his face. He carries two expressions at the same time. Wrinkles on his forehead, and a grin on his face. Look at the mask he holds, what is its expression? A snorting Joker? He makes you laugh nevertheless. Because he is the joker. Even if he is showing an angry face, you are supposed to laugh at him. Even if he is in pain, laugh at him; because he doesn’t hide it, laugh at him. Why? Because he IS the Joker. Taken for granted? Absolutely Sire!
Exiled he lives, until summoned by necessity,
Which place he’ll take, for him is uncertainty.
Seeks no favors and for fortunes has no care,
His goal? to make you laugh, even in despair.
I believe that a joker, who can make people laugh, has the weapons to make them cry too. Often, a joker is left out, out of the game, as an outcaste, as an extra entity. Then, a piece is lost. And the search for the joker begins. A substitute for the lost, and weighs more than a deuce in some cases. What if you did not find him? Game Over! He’ll live but you’re damned.
He fits in any role, any place that is vacant.
But alas! What is his fate, if not to be left alone?
Separated from the deck when the game is on?
Such is the tale of the Joker!

Hmmm...Very nice topic you choosed !
Liked the way you expressed..
Really almost people don't cares that what is hidden after that mask..they just laugh on him and enjoy themselves.
Your post made me realize something about that I didn't thought..
Thanks..

Why do i feel something behind that post?
We all carry some bits of joker within us. Don't we? Not always we are happy but have to mask our emotions.. We need the mask. Sometimes to protect ourselves sometimes just for others.
Good read. Great points said.

We all have a senile bit of evil inside us, a mysterious side, and its fun. Foe me, the joker is always Heath Ledger, nothing beyond him.

Very well said... Each person is important and we should never take anyone for granted... But somehow I'm a person who takes a lot of things around for granted... I know it has to change and I hope it will...

Loved those poetic lines in between...

true that it has the power to make us cry when he is no where to be found...and i too can see something behind that post, everyone of us can find a joker within or around us, may be in the family or friend circle.

But we are lacking perfect Jokers in the deck. Everyone wants to play as King or Queen.

aaah.. read a meaningful post after so long! Joker is one character which is so mysterious.. and also sinister at times.

Did u knw there's something called Coulrophobia- Fear from clowns!

Loved the last few lines-
He fits in any role, any place that is vacant.
But alas! What is his fate, if not to be left alone?
Separated from the deck when the game is on?
Such is the tale of the Joker!
Super duper piece of writing!!
*hats off*

what a creative piece of writing! i love it...indeed, who ever thinks of the joker!

excellent write up Anshul. I get the beyond the surface meaning..Aww..well done you, for coming up with such a brilian piece of work. Reminds me of the movie 'bheja fry' and the idiot played by Vinay Pathak.

JOker is no different to a king or queen except that he is always taken for granted. I know so many 'jokers' (i mean those who are taken for granted). I sure have taken a moment to respect them for who they are and what they are as I read this post. I shall remember this post for a long time. A wake up call it was. Very very well done Anshul. thank you so much for this. Bless you.

Pumpkin pie... may I ask from where you got this idea??? I should conduct some tests, to see what goes on in that small brain... great one!

You know, now your writings have matured? You seem to be growing by the day... great one Anshul.. :)

@Deepika
What do you feel behind this post?:P

@Meher
For me, he was an awesome actor who did justice to the role in a way no one else could have.

@Duchess
You too? What do you see?

@JP
Probably the deck is wrong, check a new one, you might see him.

@Mehak
I did, thank you.

@Always Happy
That was one hilarious movie. Oh and thank you! :)

@Tanvi
Even I am baffled where it came from. And hey, don't call it small, you see, it might feel bad. :P

Whoo-ah! I liked it. You hit it this time, with the narration. What you tried to portray and convey are good, no doubt; but the narration..

A great post with a different thought.
I too want to ask people 'WHY SO SERIOUS?',have fun with life.
Hope you hav a joker all the time with you,so he takes care that your smile never fades away.
I think having a joker lying under the our skin also helps us.

Blasphemous Aesthete, you writing in such matters has a personification of its own, the observant person you are, you bring life and sides to things....that goes unnoticed in day in day out.
brilliant is all I can say...
love your work

Comedy is a serious business... You do have a discerning eye for detail...fascinating "hat ke" read..

I just the flow of thoughts.... God BLess

Totally loved the way u hav written it...and the last four lines just stole the show.

@Neeha
Yeah, I have my Joker with me.

@Pulkit
Hey that was too much. I might get a hard time digesting this compliment. :P
Thank You.

@Inquisitive Life
I think something slipped in the flow. :P
Thank You.

Hmmm.. What i saw was a reflection. And that made the differen feel in the otherwise humor intended or thoughtful post. I am no ayn rand to tell whats going on.. Its just a perspective. :)

A joker...with wrinkles on his forehead, and a grin on his face...
very thoughfull.

A real life joker is hard to find..noone cares for other's smile..every one is striving to maintain his own...

is the poetry yours?

A very nice topic and like every one has been saying , I too must add *excellent*

@Deepika
So you have the Joker. That's nice.

@Megha
Wrong! I do.
And yes, the lines are mine.

Quite an original and creative piece of writing!

The Joker would rather not be part of the game. That accounts for his hearty laugh and high spirits.

He fits in any role, any place that is vacant.
But alas! What is his fate, if not to be left alone?
Separated from the deck when the game is on?
Such is the tale of the Joker!

To me, everyone, specially the ones behind the curtains whom we often take for granted, and yet, who iron out the rough edges of our life represents the Joker...
and at times, this lack of even a cursory glance turns the Joker on his/her head.....nice, introspective post... :)

spellbound! both - by the thought and by the way you expressed it!

The next time I behold a joker, I might not use it.. some things are bigger than just a game eh?

Thanks a lot for the wishes .

Hmm this post has all in it , full of lesson and the verse I liked is
"Among the kings, and queens and aces,
Turn wise steps and rapid paces,
In those royal suits comprising fifty-two
There lives a solitary Joker"

Yup life if full of happiness , why to be so serious.

@nothing profound
And neither does he crib over things when he is summoned.

@Raj
Thank You for appreciating.

@Rek
A joker cares not for himself but your smile.

@Beauty and The Beast
That is why they are just a single piece when each card has 3 others of the same rank in other 3 suits.

That's a great tribute to the 'Joker'! Loved the way you have portrayed him-- your thought on him...

I am a huge fan of "the joker" from "the dark knight"! I can't stop wondering about the perfection of the Act! The dialogues.. the delivery... "mad dog".. :) makes me smile- leaves me blank- inspires me each time I see him on screen!

U have reminded me of everything all over again!