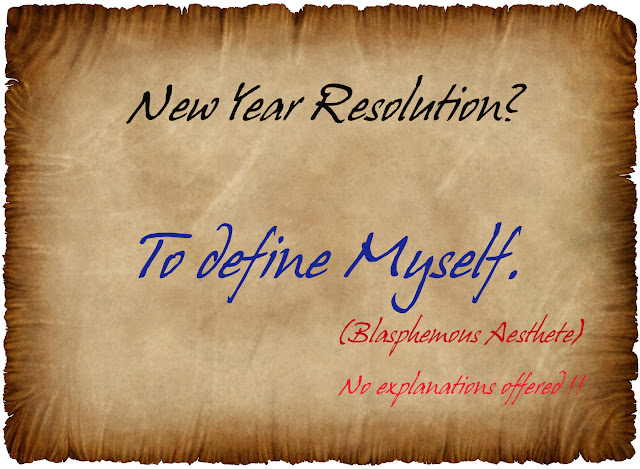 Awesome dude!!! A lovely resolution :P heeheee but do tell me after that :)

You got it, its an everlasting process :)

cant get better than this..

@The Phoenix Rising
Okay, so that was a joke? okay haha. :-|
I wish I had brains enough to understand that.

HAPPY NEW YEAR...MAY THE YEAR BE FUN,LOVE FILLED and I think one should not run behind success...if you have worked hard and faithfully no one can stop it...success will come towards you...
Be Happy and Successful :)
Wish your paper plane turn into a real one...

hmm interesting anshul...i am sure it will be a beautiful experience defining yourself...i have none as of now..lets s...wishing you a very happy new year..

Keep trying, The answer has to come from yourself

@Beyond Horizon
Okay, lets make it a mutual symbiotic relation between Success and me, I run towards it, it runs towards me, and we meet soon, sooner than stipulated time.
You've got to run, if not after something, then something's after you and you have to run. So better run with a desire to catch up. Not in the fear of being catched up.


@Tweety
happy new year to you too.

@AS
Yes, it has. But then what am I Blasphemous Aesthete for? :P

@S
Happy New Year to you too S.

@AS
okay am dumbfooled now, there are two 'AS' commenting. One from open id and other from blogspot. Are you two same? I don't think so but still, are you?

i guess i'll accompany you.. for every time i think i know myself.. i encounter something new. phew..
all the best for it
happy new year!

Not in the fear of being catched up...nicely said
liked the symbiotic relation :)

Heyy.. Happy New Year!!
Can we have the definition please?? Hmm, I have always wondered why u call yourself Blasphemous Aesthete. Uff even typing that was complicated. he he.

Tell me later next year... if you are successful :P:P

Good one.. With you we can always expect something different!

Mine is to live wisely.. You know what I mean :)

amazing! i think it will be a complicated, long drawn out process though.
But good luck and best wishes!

@Deepika
The pursuit can be the same, am not sure of the paths.

@Punam
No, as I said, no explanations offered. Its your own judgement.

@Mehak
Of course, but then we have an year at hand. Thank You.

I had a resolution once some 4-5 years back, that I'd never make a resolution and I'm sticking to quite well ever since.

All the best, may you see success.

@Disguise
Thank You. Is that face your's or just another disguise. Kidding.

@Sourav
Good to hear that you are sticking to it.

@Alka
Just because of the word 'New'
Hey, we are not talking of breaking any, not yet.

dats d best resolution though need a revolution to do dat, all d best dude n a very happy new year to u

Interesting & hope you succeed..
Hope this year brings you success & helps you in achieving your goals..

You'll probably need a good deal of the year to do that :P

Quite an intteresting blog you've got out there! and even better of a resolution.
cheers :-)
Nil.

now that's a resolution that could occupy a lifetime! All the best!

And wish you have a fulfilling year ahead :)

@Vineet
Revolution? Dude, we are engineers, don't you know what that means?

@Neeha
Yep, I am sure it will be good.

@kish
I have a good deal of the year to do that.

@Beauty and the BEast
And sometimes, it won't take a moment. It's all about the situation.

I ll live by the day and I guess the yr isnt that good for me ... the beginning has been painful...
i wanted to know...If i have to visit the dentist ?

Anyway may god help you to break it :D

seriously No explanation require..
Hope You will define yourself at ur blog till 31st Dec...Thanks for dropping by my side :)

@Duchess
no, it wont be necessary.

@Alcina
Contradicting, I don't see how. Perhaps you might want to elaborate?

@An Ordinary Gal
That is something for me to decide, on my blog, or otherwise.

Is that the same as you being fine before the New Year but you're hoping to lose some fineness and get defined? I say stay fine.

I wandered over via Tabitha Bird whom I found via The K is no longer silent, where I saw Tabitha's name and thought of The Tale Of Tabitha Kitten (by Beatrix Potter - which I remembered from being a kid) and then thought how lovely in a contrasting and unlikely marriage, to have a bird and a cat in one name....and you had left a comment there and your name is intriguing also. Glad I cleared that up. Happy New Year.

@sm
Happy New Year to you too.

@Purba
I need a yardstick at least. I might break it tomorrow, but still, we were not headed no where when we landed on moon.

@ Rachel Fenton
Whoa, and now I can backtrack you following the trail. :P

well, I did not look from that perspective, de-fine. You got me thinking. Thank you for rendering another angle to it.
Happy New Year.

And how are you going to define yourself? =P i know it sez no explanations offered...but still!
Love the layout =)

all the best :D that's one of the toughest thing to achieve..

Define yourself...by words, thoughts or deeds??....
I have long given up defining myself...either too much or too little to work on...
this year is a more earthly achievable(hopefully) goal....lose weight the right way....
happy new year.

Interesting. When you do put it in perspective...I am sure it will be an interesting read.

To define yourself literally? Do we really know who we are truly? I dont. Dont even know if defining myself is possible. Whats your take?

@Sana
well I am offering no help.

@aria
yes, but why would one settle for the easiest when the prize is worth it?

@Nikita
Perspective? I don't know if you could look from mine, we al have our own.

@LSL
We do, and we often run from it. I won't. I'll accept it, among other things.

this is most interesting new year resolution I have read so far. good luck with your self enlightment journey

:) ... U know... this resolution is just gonna add up on your resolutions throughout the coming years...

it's a very interesting "project"- to define oneself..I have still not managed to get it done..

Hmm...interesting resolution u choosed...And I think it's the best resolution.
Liked your blog and thoughts too :)

Interesting..I was thinking considering your blog really nice, define, or re-define?? Anyway, all the best man!! And a very happy new year!

@Matangi
okay, and best of luck with your own. Because, for me, being happy is not a resolution, but a state.

@Sushant
thank you. Well, you were considering it, what about now?

so..this must be the resolution u made every year and couldn't had the answer either.....

anyway, I haven't made any resolution...its better that way sometimes!! [:P]

Hey Anshul, I only just saw this post. I have a similar resolution for this year. Shal try and be myself and that way define myself.

@mk
Either? I don't think so. I have never tried this before.

@Always Happy
All the best. :)