Why don’t I wander in the light? Am I not afraid of the night?
For ages I have lived in this city. A city which doesn’t see the sun any more. Which has been living in the shadows of the buildings. In a city where the sun feels congested, amidst buildings that penetrate cloud cover, I think that is smoke.
I forget things, and then they come back suddenly, but only sometimes. Friends say that I have some form of dementia, I don’t remember the name most of the time, forget about getting medication.
I like it though. Forgetting things, names, faces, places, lists, numbers, days, time and myself sometimes. I think it is good, keeps my life from being monotonous.
This city is too monotonous. I think I know why. When people think that they know enough of each other, they don’t pay attention any more. Then, they stop knowing at all. And there comes a drift. I think of this city too, to be drifting. Where people are lonely even when they walk hand in hand. It isn’t growing. It’s collapsing, under its own aegis, within its own shadows.
My friends tell me that when I started business in this town, I was ambitious. They too were. They asked me once, How much closer do I want success to be, to me? They tell that I said that, I want success so close, so close, that...I can see it like a mosquito on my nose. So close, that the line between my vision and success is blurred. It is ironical that my vision is blurred without glasses today. How close did I get to success? The town grew with me, it grew younger, and I…
I was overjoyed when I saw the first grey on my head. I believed what everybody said. I believed that I was growing wiser. Strong. Wrong! I was ageing, growing older. Wisdom, it often finds itself in misery. In this city, loneliness being one of those miseries. The town grew into a city, and I grew into an old man.
Sometimes I too have wished to pen down some thoughts as they came, but the moment I tried picking up the pen, they were gone, resenting to be scribed on any form of parchment... This forgetfulness, its not new to me, just a bit more redundant nowadays.
Once my son, glaring out of the car window, had watched the lush green pastures. I had pulled over the side to roll down with him over the slope of green pastures. He liked it, I liked it too. But today, he too joined them, like I did. Rat race, after cheese. He does not understand what I have to tell, what he’d find at the end of this track. But I am an old man now, forgetful, half out my mind. Maybe my grandson would understand in the beginning itself, he loves rolling o’er those slopes of green, just like his father. He is scared though, of shadows, sciaphobic. He wants to run away. I too want it sometimes, away, where there are no shadows.
Have you ever feared that when the clock strikes noon, when the shadow is just beneath you, forming a small dark patch, that patch may just swallow you?
Shadows look more like a crime scene. Mischief is what is in their minds. These are dark places, devoid of light after all. This city is full of those, shadows!
This shadow, it’s the place created when object obstructed light from reaching there. This object has this capability to block light, I wonder. This object seems very dangerous to me, it can take away light, like it could break a lifeline. I fear this object. They tell me that I am this object. But then, really?
I wished my shadow could leave me. I would have left it alone on a train going nowhere in some foreign lands and never would have cared to know what became of it. But I guess that it knows my intentions too well. Darkness is where I can’t distinguish it from myself. So long as I behave, it behaves itself too. It follows me closely, watches every step, and monitors every move. I wonder if it wants to leave me too.
Someday I’ll walk over a ceiling less place with sun glowing under me. There will be no shadows, and I will move into light. It won’t be this city, it’d be some other place.
I guess this is the gift that this city gave me, this habit of forgetting. Names, faces, people, events, lists, numbers.  What was the name they give to this condition again? Ah, Alzheimer’s it is.  It’s not just any city that is crumbling. It is people who are breaking, forgetting.
It’s been a long time I tried reminiscing about this city, and it’s about dawn. I guess I should sleep. Good day! 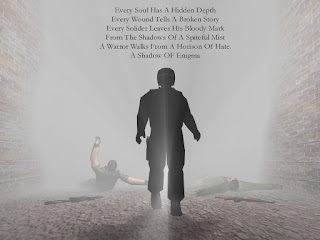 Oh...wat beautiful gripping description of thoughts in a mind...loved d para abt the shadow...
well done...

Excellent post..
I loved the pic too 'shadow of Enigma'....

a masterpiece.
why do i wander in the night? am i afraid of the light? :P

This has a very Jonathan Livingston Seagull feel to it, or maybe its just the background adding to it.

Have you read The Notebook, by Nicholas Sparks? If you can get it do read it...

@Beyond Horizon
That was a quicky. Thank You.

@Madhu
Thank You, am glad you did.

@M
I haven't read him yet, but I surely will if you say he's good.

@Alka Gurha
No I haven't, I will when I get my hands on it.

Shadows are actually your soul's silhouette :)

All we see is I guess a shadow cast by that which we do not see. Blame human minds, but we see the negative as more prominent, always!

For instance, can all the darkness of this world put out the light on one little candle?

Wow!! I am left without words...just so vivid. I love ur narration its so lucid.

"Have you ever feared that when the clock strikes noon, when the shadow is just beneath you, forming a small dark patch, that patch may just swallow you?"

...yes, I did. Always.
Thanks for writing it down for many of us.

@Sourav
am not totally sure about that. Can you discard the words and read what the shadows speak? read between the lines?
and yes, darkness can put out the light of a small flame. Look it from a great distance. Plus, darkness has its friends too.

@Tanishka
:-) Thank you, you have a unique name.

@Irina
do you want to give in to its force?

wow!! what a nice post! You write very very well. I will spend some time reading your previous posts.

very thoughtful and meaningful write up. Will visit you again for your forthcoming posts

"Someday I’ll walk over a ceiling less place with sun glowing under me. There will be no shadows, and I will move into light. It won’t be this city, it’d be some other place." the hope that keeps us going and always will.

if winter comes can spring be far behind...
cheers

wowo that a thought.. ALL the best my friend .. and I hope and wish what you wish for comes true ..

@Deepika
they too are inevitable

@Bikramjit
thank you, it will.

Don't remember the author,
but hey, we aren't dead, no not here, not yet.

Anshul, a fresh perspective indeed!! love the way you have dissected thoughts and injected philosophy!

very nice write-up.
A shadow so well described , thoughts are sometime so amazing, which you very well portrait.
Lovely.

You have a lovely blog...
and these thoughts of yours, are thought provoking in itself !!

Glad to be a follower !!

Thanks for sharing. I used to live in a big city too. Hong Kong to be exact. I felt like this often.

@Enchanta
I don't know, am glad if you find them thoughtful.

@D.A.
really, so if I keep out stress, I'll always have black hair? That would be easy, if it happens

"When people think that they know enough of each other, they don’t pay attention any more. Then, they stop knowing at all. And there comes a drift" So true, so true!

The shadows that crowd his mind..made me incredibly sad. An evocative story, well narrated.

from cold therapy I mean bath with running fresh water. .hehe
thats. it ;-)

Mesmerizing..Never ever in my lifetime have i read something so calm but yet rumbling from inside..

And i wish more comes :)

@Vivek
Got it, thank you.

@Alcina
I too wish the same.

the narrator seems a bit like me.. I hit the sack when dawn strikes.. however I envy him for this forgetfulness.. its such a bliss.. memory is the bane of my life..
well written :)

Woah! I like this. Not just because it is a wonderful story narrated flawlessly, but because it is strewn with metaphors, concealed implications, subtle ironies and careful mixtures of immiscible substances, entities.

Patch of shadow that could swallow you! Interesting!

Normally I'm staunch believer in minimalistic templates. But this time the birds' silhouettes in the backdrop were poetic. Nice job.

@aria
you might, when you grow old, in time.

@Sayak
Thank you. And you are right.

I never thought about the silhouettes though, shadows are tricky, you see?