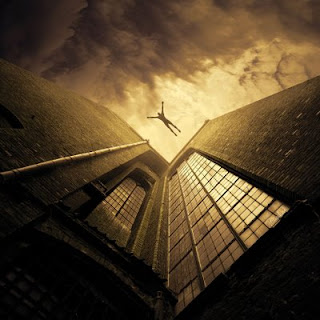 ‘Ben, I am here, I am with you’, the little boy could now hear this voice crystal clear as he started to walk on the edges of that sinkhole, that the earthquake had created in his very own house. He could now feel people patting his back as he made his resolve strong. There was no one around.  ‘Ben… Ben…’ his mother’s surprised and troubled voice was getting more and more distant as he edged towards those weak narrow stairs. She was calling him back. Half angry, half worried, she called at him, from not so far, but still she was barely audible.
They hadn’t been there. Something had driven them away from the house, into the jungle when it had happened. No one close had died, rather nobody had died at all. No one had suffered injuries either, what was going through his mind? What demons possessed him to willingly enter that abyss?
Careless steps on the narrow ledges, and still no break. People would cling on to the wall to dread into such places, and yet he walked with his hands in his pockets. He was numb to everything.
He did not fall, and what could have happened next, I could not possibly know. I woke up. What was that? I did not know.
I haven’t seen any movie remotely related to this or read anything close, and why would that boy be named Ben? I don’t know. Such names don’t come to my mind when am conscious. It was a dream, a very bizarre dream to me, I had it written on a page the moment I woke up (Dreams are such fickle visions, they seldom stay). I don’t know what triggered it, but today, I found that page again and thought of sharing it with you all. Can anyone explain?
* A little engrossed with exams these days. So just posting an entry, raw, as it was, as it had happened, as I had seen it. I still don't get it, what was that?
Thought over by Blasphemous Aesthete

May be it occured/saw something like that long back and your mind gave a quick review.

Or may be a small introspection of the future. May be with a different name.
Just kidding. :P

Anyways it was a nice little dream. Sometimes dreams don't have a sense and meaning. But I am not sure whether this has or not.

And all the best with the exams. :D.

obviously u must be knowing that dreams are not a flicker of out of the world, whatever we see is product of out sub-conscience.

The faces the voices are always seen or heard in our lifetime... there is no logic behind some dreams, its just out in a blue moon with no meaning mostly... but if it stays in memory they have caused many people to lose there conscience because of meaningless scenes and voices.

don't let the take a toll over u.

anyways u know better than me..... u may ignore my above rambling.

muchchhi, Sigmund freud ka nam to suna hi hoga.. may be his theories can explain ur dream :P :P :P

Its your state of mind my sleepy pie :P It maybe because you fear that...and it also can be that you must have seen something like that in your childhood which might have left an impression... ? Well options are many but your mind will tell you the best one, it may sometime continue... watch out. Find the threads, they lie in your mind :)

maybe a deep-seated connection with worldy disaster n movies like 2012.. maybe ya feel like the boy who's always on the edge, watching stuff happen, n ya wanna go deeper n do soethin abt it.. but are ya helpless really? shud ya jump in n save the world- maybe tats de dream!

@Ajay
I am sure, I've never seen a sinkhole made from an earthquake. My mind did not panic and wake me up in sweat, that was for sure. :P

@Deepika
Ben is something my mind wont think of, given my level of creativity. An Indian name would have been a much more obvious choice.

@Manish
Yeah, am reading more on him. He has some interesting theories.

@Tanvi
Childhood mein? I haven't roamed around much. Maybe I should wait for its sequel, whenever it happens.

@Jane
I haven't watched them yet. And one thing's for sure, I am not a front line fighter. I prefer to work in shadows.

you should enroll into the show 'raaz pichle janam ka' in NDTV imagine...


perhaps they have an explanation

m in love with this post of yours...
few things have no answers...m searching for mine as well...tc

just a bad little dream i guess..:P Anything bothering u lately?

Anshul, sometimes dreams are the reflections of ghastly fears within which your conscious may not realize. Standing at the edge can also be an indicative of some fearful choices to make and the voices can be significant of some unheard messages. Ben the name is purely fictitious might have its origins laid in some characters that you must have watched at some point of time and your inner mind must have grasped it (mind is a complex web). The boy didn't fall because it shows that he was reflecting about something which in real life you must be (must have or should be). I have had weird dreams too. Anyway I am trying to predict/assume things I may be not so successful here, but maybe, it is just a message for some thoughtful confluences; that you have to undergo (for future). Phew too many words. Sigh! Nice post.

I dunno whether or not to think that dreams are an indicative of your subconscious.

Because of dreams like these...which you can never relate to any thought you ever had, not even a faint hint of it. I have had some bizarre dreams myself, and when I ask myself, why would I see something like tat, I never come up with answers.

I love the vividness of the way you put it down tho. Goodluck with the exams.

@Palak
Okay, now maybe I have an explanation. hanks for the suggestion. If the boy was to me, then I just nonchalantly tread into darkness and uncertainity, with hands in pockets. Still, I dont fall. Ye! :P

@Cinderella
Thank You. Well, all I wanted at that time was to go back to sleep and continue with the dream, like a movie. Sigh, there are no re-shows or retelecasts.

A strange dream =/ dreams may lead one to strangest dimensions at times !

I see such dreams often. Sometimes, they are too confusing, too wretched to be even expressed in words.
Deciphering a dream can sometimes be like deciphering an encrypted code.

i'm a psychology grad. would u like a psychoanalytic interpretation? lol
not that i could give u one.. :P

As far as what I know, and i have heard...every dream is related to us, in some or the other way.

As for the comment you posted, yes...I am smiling for his sake, but sometimes it's hard from stopping the tears to flow. :)

maybe as @MEhak said a psychological interpretation would be good :)

@Princess
yepp I like the time slowing down when it is dreams.

@Komal
Well I was just rummaging through old pages when I found this, I don't remember all dreams. Few are special.

@Sayak
Well then lets get down with deciphering it already, it is exciting to solve puzzles, lets try dreams too.

@Mehak
hehe, sure when my dreams start to trouble me again, I know whom to turn to. You =P

@Lonely Dreamer
hmm, maybe it is a vision, hehe

@Bikramjit
I am better off untreated and unconsulted. Lets just revel in uncertainty.

If you really want to interpret a dream, get the thoroughly enjoyable read "The Interpretation of Dreams"{ by Sigmund Freud ~~~

Usually what we dream is not always directly related to what we think etc ... at times it is something in the Background of the main dream that is more important .... :-)

hmm.. intriguing..
a vision of your past life .. maybe .. ahem..? who knows..
I often dream about being in strange houses.. a different house everytime but its always in shambles..
its perhaps coz we lived in many weird bunglows once in Lutyens Delhi.. occupied it .. renovated it and then moved away .. some of em were later pulled down for being unsafe .. am relatively settled now but those dreams haven't ceased yet .. its quite disturbing .. perhaps I have to move again.. this gives me an idea for a blog post :D

I see a lot of ppl have given a lot of thought to your dream, good to see that.

Dreams surely have a connection with our mind - it shows things we are aware of and unaware of as well.

Try to connect it with the real life situations u r facing - family, relationship (if any) or ur college. u will find some connection.

Do u feel vulnerable somewhere?

Dreams are free. Dreams may be the tomorrow. But when they are dust, vacuum.

@Som
I will someday.

@aria
ideas and dreams, they find themselves in uncanny places.
Umm the places you lived in were pulled down for being unsafe? Did you do something to them or you just made narrow escapes? :P Kidding.

@Restless
I don't dwell in dreams that I see when sleeping. It was just that I remember a few and am able to pen down a fraction of them. Otherwise, I just wonder that if I could be conscious while unconscious, I'd make a very good script writer, at least I'd enjoy the movies... which I see in dreams otherwise.

@Sourav
Dreams are, well, dreams. What can we say about them, they are enjoyable though. I have never died in those, no one has, yet.