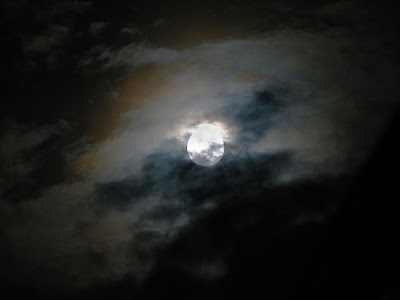 Had a fight with someone too dear to lose; the series of events that had happened in such little time had managed to keep sleep at bay. The bed felt laid with nails and the sofa in front of the Television bitterly bit back as I tried to distract myself. Desperate, as I stepped out of my house, a torrent of cool air blew across me. But to no avail, it struck my bosom like a pointed sword. Flood of emotions burst out from the subconscious. The words resonated inside me, like a screaming. Like a sandstorm, faces, dialogues, words, emotions, everything that could possibly hurt were swirling my head out of control.
The night, like a benevolent sorceress was incessantly trying to soothe me. Lofty mild clouds, whistling winds, swaying trees, untiring chirruping of the insects and the twinkling fireflies trying to burn the darkness. But every effort it made turned out to be futile. Having tried all the tricks to provide some respite to my agonised mind, it was left with its last wonder. I lied down, and through shallow burning eyes, gazed up into the open skies.
The more I gazed, the more it enticed me. Playing hide and seek amongst the clouds, was a vast empire, trying to attract me into its majestic domains. It appeared as if coming closer to me as moments passed by and then engulfed me.
Did it know me? I wish I had believed! But then, it knew everything. My hurt, my pain, my joys, my gains, my triumphs, my failures, my self, everything. It had always known me. But that night, it was instilling me with this new faith. Persuasively, it opened up itself upon me. The seven sisters, the great hunter, the northern guidepost of sailors, the great square of Pegasus, it was all enchanting. Spread across the vastness of the heavenly canvas, was the murky Milky Way. Everything seemed to talk with me aloud, and I spilled my heart. In a cosmic carousal, I drank new life. They knew everything I had to complain and still they gave a patient hearing. Emotions behave in mysterious ways. A little talk with them put an end to my unrest. It was just the beginning of a lifelong friendship.
They suggested answers, and for the first time, I won a losing battle against the world.
Thought over by Blasphemous Aesthete

astrology, you absolutely adore it dont you?

and btw, no one is too dear too lose. unless there's that thread of blood.

Its astronomy that inspires me (Astrology is something I don't resort to)
and for being too dear to loose and Blood relations, welcome to the world of Blasphemous Aesthete. Here things don't take the normal course.

normal? whats that? no idea.

btw, is blasphemous aesthete gonna be a legend someday?

Well, Blasphemous is a legend in making.

wow! loved the description in this..:)
keep writing!

this z reeli beautiful... t hz happened wid me too.. n i cn dare sae , i kno xactly hw yu must hv felt then.. the jugalbandi f emotions.. n separation frm one so close n the attachment wid sth so vast n intense... its a feelin worth known onli to ppl hu hv been thru it... a humble wae to put in the immense cosmos into letters n characters.... wondrful post

Thank you everyone,
@ Mehak & Yougal
Thanks a lot.

@ Silence_mystified
It feel good to know that you are not alone.